Givenchy designer Riccardo Tisci enlisted some of his favorite ladies to walk the catwalk and model the brand’s impressive gowns during Paris Fashion Week on Friday, June 24. Among those who were selected to work with Riccardo were , and , who absolutely turned heads on the runway.

Kendall drew attention when she stepped out in a black-and-white one shouldered gown with feathered detailing. She looked different rocking pixie haircut and minimal makeup. She also donned a pair of black pointed heels and big pearl earrings.

Bella then followed behind rocking a floor-length black dress, which featured beaded fringe and embellishments, teamed with a pair of edgy studded sandals. Rocking the same earrings and hairstyle like Kendall’s, the sister of pouted her lips and looked straight while walking the runway. 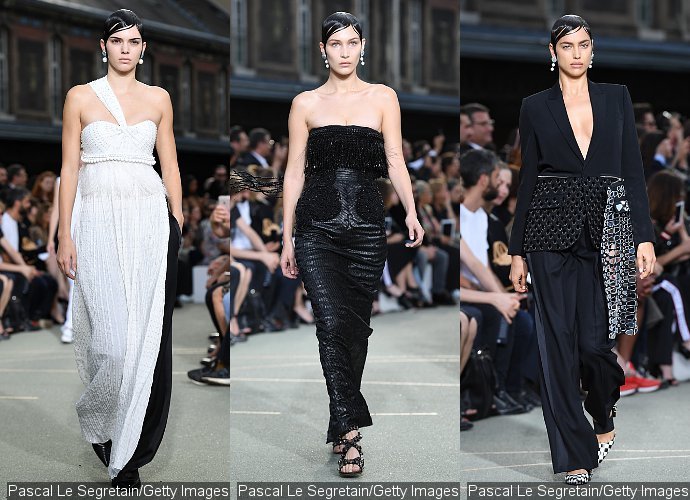 Irina also stole people’s attention as she flaunted her cleavage in a black blazer which she left open, black trousers and checker board-patterned heels. She looked stunning sporting minimal makeup with nude lipstick.

On the previous day, Kendall was spotted spending her spare time with , who also happened to be in France at the same time. They stepped out to grab dinner. Some fans managed to snap the two when they walked down the streets of the City of Light. Kendall was seen wearing a tartan long coat and shinny black boots, while Rocky donned a green army jacket atop a white shirt and black skinny pants.