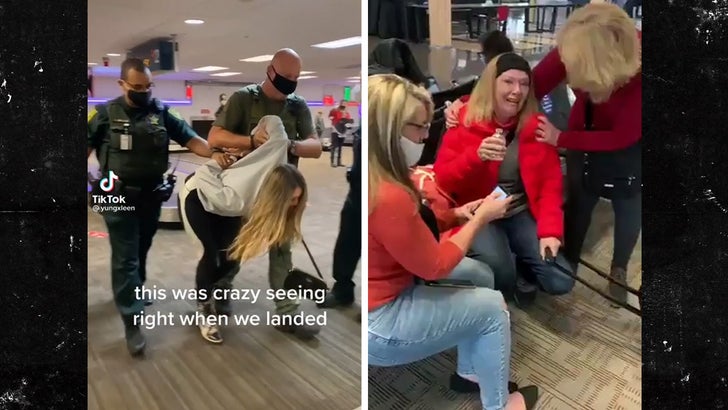 The feds have been busy rounding up people who allegedly took part in the Capitol siege — and some of the suspects are NOT going quietly as they try to get outta Dodge.

Several videos were posted this weekend, purportedly of Trump supporters suspected of taking part in storming the Capitol … and when agents picked them up as they were departing or landing at different airports, a few of these folks threw crazy fits.

Check it out … almost all of the supposed #StopTheSteal demonstrators here are either sobbing or screaming (or both) as federal agents and other law enforcement swoop in and take them into custody … one guy can’t seem to fathom why he’s being called a terrorist.

In another terminal incident, a woman with an Eastern European-sounding accent tells the officers detaining her that she’s got 3 minors she’s traveling with, but that doesn’t prevent them from hauling her away … with her several officials lifting up her entire body as she shrieks.

One of these clips makes the explicit connection between what’s going on and support for Trump — which, by extension, can reasonably apply to the attempted coup that went down.

Assuming these are all related to that — which seems to be the case — then it’s just the latest example of federal officials going on a full-blown crackdown on as many people as they can find. Remember, the FBI did publicly ask for help in identifying as many as possible.

Looks like they got their wish and then some.